In the spirit of the Running Librarian...

July 28, 2008
...I shall detour from my normal random posting on vaguely law and library related topics, and sidestep into my "real" life for a moment.

On Saturday 19th July , I took part in the Edinburgh Rat Race for the 2nd time, doing the Mean Streets Prologue event. The Rat Race is a team event, 3 people with 2.5 hours to make their way around the city by foot, hitting checkpoints and completing fun challenges along the way. the Adventure Class do it over 2 days, with much more crazy stuff on the second day, and the Mean Streets counts as their warmup, taking placeon the Saturday evening.

As a not-very-fit sorta person, I wasn't sure I could manage this at all last year, but I did, and so I was looking forward to doing it again this year. A friend organised the teams, so we entered 6 teams of 3 peeps. I'd never met my team-mates before, so I was worried I'd be slowing them down if they were really fit:  a 20 year old Uni student and Officer Cadet, and a 40ish marathon runner! In the end though, we turned out to work really well as a team...so much so that, 7 miles, 15 checkpoints / challenges (including keepie-uppies, juggling oranges, Wii ski-ing, deciphering anagrams, piggy back traversing stone ball sculptures, running up and down vennels, lanes and streets, climbing Calton Hill and general madness) and 2.5 hours later, we actually ended up being the winners from our group of 6 teams! And from what I can work out from the spreadsheet, 7th overall of the 35 Mean Streets only teams!

Very chuffed with myself, especially as some of the guys in the other teams were VERY competitive! 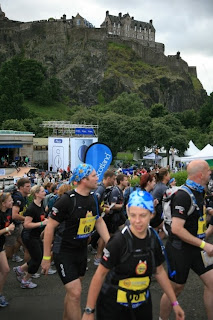 And as proof, here I am as we started - the current toxic red hue of the head is particularly distinctive methinks, especially when it looks like I'm growing out of someone elses bandana...!

Unknown said…
I like to think I provided you with some inspiration...at least to write the blog post, nice hair by the way and congrats on completing the Rat Race again!
5 August 2008 at 16:29