The legacy of the snail 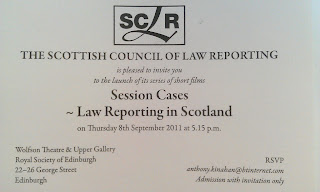 Last night, through nefarious means*, I was invited to the launch of a series of short films on the Session Cases, by the Scottish Council of Law Reporting. The Session Cases are the most authoritative series of law reports in Scotland, and they are created and published by SCLR.

Definitely a useful resource for law students, law tutors, those who have to source Session Cases for users, and anyone interested in how Scots Law works.

And, of course, the Paisley Snail makes a regular appearance throughout, in all its ginger beery glory.

One thing I'd disagree with though - the videos said how wonderful it was that most Session Cases were now available as pdfs of the original pages. This is good because it means that the judge and counsel are looking at literally the same page. I'm sorry, but I don't see this as a good thing: why is a pdf of a page better than an electronic version? They're often difficult to read, and when passed between parties as an attachment to an email, they aren't searchable in the same way as an electronic version is. Insisting on pdf versions is a backwards step, and it probably wasn't disputed because the judges who were interviewed in the videos are the group who prefer the pdf versions.


*It appears that I was invited because I'm technically in charge of my professional group. The inviting system was somewhat odd - the audience consisted mainly of the people starring in the videos, and the people who had made the videos. No actual end users seem to have been invited (I was one of 4 law librarians in the audience, and we all seem to have been invited because we're allegedly Proper Professionals (me) or were in the video, or were linked to SCLR), and I'm unsure how SCLR are planning on publicising this to their target market, which I assume is law students/law schools.