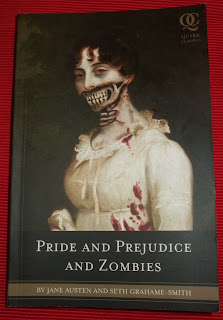 I'm not one for Regency romances, or any book where the "plucky" heroine has to struggle womanfully against the suffocating strictures of the moral code of her day (in a ladylike, delicate manner), so Jane Austen books have never appealed to me...but if you throw in something a bit different, like zombies, I perk up! So, when I read there was a new book coming out, a mashup of Pride and Prejudice, with zombies, I pre-ordered straight away!

I've enjoyed reading this (despite some editing / proof reading errors: e.g. I know for a fact that the English countryside has at no point been the native home of chipmunks, and the concept of "coy ponds" instead of "koi ponds" in a Japanese parkland setting was a bit jarring), and the addition of zombies definitely made it more entertaining: no walk in the English countryside, or carriage ride to London was safe from violent zombie attacks. And no young lady of refinement is considered to be accomplished unless she is skilled in the Deadly Arts, and has studied them in Japan or China. So the various encounters, and methods of despatching then certainly made for a bit of light relief when the "thwarted love that it was indelicate to discuss" thaaang kept coming up. And, although I early on thought I'd like a copy of the original to compare this to, to see where the differences from the original text are (other than the zombies), now I know I just couldn't cope with having to read it. It ain't made an Austin fan of me...but perhaps it has made a zombie fan of me.

Next, I shall read of one poet's descent into the zombie horror by buying Zombie Haiku...

Abigail said…
And here all I could think was "dude, haven't they rewritten that book enough?" But I'm a hardcore Austen fan and P&P is one of my very favorites.