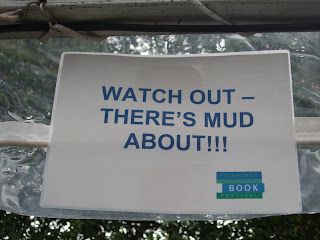 So, on Monday afternoon, it was time for the now-annual Scottish Law Librarians Group jaunt to the Edinburgh International Book Festival. Every year, the Committee try and decide on an event that's as relevant to the members as possible (law related, Scottish issues, publishers with a Scottish interest), and at as convenient a time as possible...and that we can get enough tickets for. As you can imagine, that's not always an easy trick, but I think we did well this year, and even managed to get a day when the mud was minimal, despite the signs warning us about it!
The event chosen was Michael Mansfield. The info's gone from the site now, but it was:

Michael Mansfield Mon 31/08/2009
4:30 PM - 5:30 PM
From Ruth Ellis to Jean Charles de Menezes, Bloody Sunday to the
Marchioness disaster, Michael Mansfield has taken on many of the most
difficult cases of our times. The Memoirs of a Radical Lawyer recalls a
career defending the innocent (and sometimes the guilty), infuriating
the establishment and championing human rights, with wit, passion and
honesty.

He's hit the headlines lately with his claims in his book that Princess Diana's death was not an accident, but on Monday he was more concerned, as were the audience, with the implications of the recent release of Abedelbaset Ali Mohmed Al Megrahi, or the Lockerbie Bomber. Michael Mansfield was in attendance at much of the original trial, and indeed, his book begins there, and he read to us a small sample to illustrate, so he has a wealth of knowledge about the case.
In advance of the release of the related documents on Tuesday, and the Parliamentary debate / motion today, he made various points about unanswered questions which he hoped would be raised in the debate:
Why was Megrahis appeal not expedited when it became clear that his condition was terminal, as it would have been in England. He waited 2 years for his appeal to go through, and in the end it was dropped. Who or what stopped the case being reviewed as a priority?
What was the evidence the Scottish Criminal Cases Review Commission on which based the referral of his case to appeal?
Why was he not returned to Libya on the Prisoner Transfer Agreement?
He also read from trial transcripts of the Maltese shopkeeper identification of Megrahi as the man who had made purchases in his shop. The shopkeeper seemed very unsure of himself, as is understandable. His initial identification of Megrahi was made 9 months after the alleged purchases, and the trial was 10 years after that event. As Mr Mansfield said, this is an incredbile timescale to be able to identify a man you served for 5 minutes. There was also confusion over when he saw photos of Megrahi, and the fact he identifed another individual, and changed his description of the suspect from interview to interview.
Mr Mansfield explained the concerns about where exactly the bomb had got onto the plane, and how it had got through security, wherever it had got on.
He believes no issues will be cleared up until there's a proper, judicial enquiry, something which he feels the current Brown/Blair government will try to block.
Woven amongst these discussions (and often linking to his belief the Megrahi was failed by the system) were other interesting snippets. He spoke of the Oscar Slater case, a Scottish miscarriage of justice which Sir Arthur Conan Doyle was heavily involved in righting, and which helped lead to the founding of the Scottish Appeal Court in the 1920s(apparently the English one had been founded earlier in response to a similar miscarriage of justice there in the 1900s - I've not got time to fact check either of these statements).
He was heavily involved in the Stephen Lawrence case, representing the family in the private prosecution, and wearing a ribbon during his appearance at the event. He again raised the issue of being able to identify properly a suspect, not only in Stephen Lawrence's case, but also Megrahis. In both cases, idenitfication was based on one witness identification, and in Lawrences case, this was not enough.
Mr Mansfield then took questions from the audience.
The first asked about the Bloody Sunday enquiry, sitting for 10 years and not yet reporting, and whether this was why the Government tries to discourage public enquiries. His response was that that was a massive, historical enquiry involving thousands of witnesses, all of whom needed to be treated as being as important as each other. It was set up to fix what was seen as the whitewashing response of the first enquiry, so must be totally wide ranging. It's now almost ready to report, and has acted almost like the Truth and Reconciliation Commission in South Africa and other countries, to allow those hurt to face those who inficted the hurt, and let their voice be heard.
Another (slightly odd - there's always one) questioner pointed out the discrepancy in the height between Megrahi and the description given by his Maltese shopkeeper identifier. Mr Mansfield said that the height difference was understandable, few people are experts on height estimation, but his other descriptions were more seriously flawed.
Finally, he was asked about who's in charge of security, and where does "the buck stop" when it goes wrong. Mr Mansfield agreed there were serious questons needing answered about who knows what, and when. He gave the example of the London bombings, when initially all the security services denied knowing anything about the lead bomber...and it's since leaked out that at least some agencies did know about him...so why did't they tell the others? And if it was true that they didn't know anything...then what was the point of having these agencies at all?
So, despite the attempts of various police and ambulance sirens to drown him out at least three times (one of the joys of being in a marquee), Michael Mansfield treated us to an interesting discussion on the ins and outs of the legal process, and the innocent victims it can sometimes create. 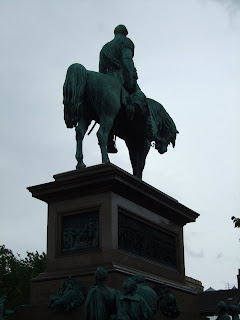 And Prince Albert, the Prince Consort, supervised it all from above...I think his horse was a bit tired by this point...it's been a long Festival.