November 15, 2010
...you know, where I've been since I last posted about going to Australia.
Well....
Would you believe me if I told you that I'd somehow ended up wandering in the port in the early hours of the morning, and accidentally stumbled into a shipping container, which somehow locked itself behind me? *
And that after hours of banging on the walls and shouting to no avail, I fell into an exhausted asleep, only to be woken up when I felt the container swaying gently around, before being jolted across the floor when it thumped down suddenly?
Soon after that, I heard the ringing and clanging bangs of other containers being placed around and above mine, trapping me in the centre of a pile of huge metal boxes. I was enclosed in a container-made cage, on what I had to assume was a ship, bound for an unknown destination with its registered cargo. Plus the addition of an unauthorised, accidental stowaway. 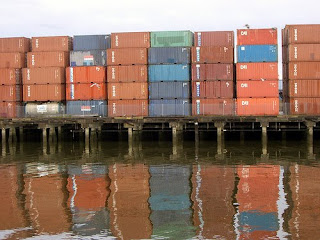 With no way out of the metal box, I just had to resign myself to settling in and waiting, hoping that somebody would eventually find me. Luckily for me, I'd fallen into a container well supplied with Irn Bru and Monster Munch, so I managed to sustain my strength through the long sea journey. In the darkness of the container I soon lost track of time, although luckily the dynamo torch on my keyring allowed me the luxury of illumination when I needed it. Such as when I had to choose between Roast Beef, or Pickled Onion Monster Munch. The Flaming Hot Monster Munch I used to create a mattress - it's the only thing they were fit for, I certainly wasn't in a dire enough situation at that point to be forced to actually eat them.
You will have gathered that eventually, of course, the ship arrived at its final stop, thankfully here in the UK. As the containers were unloaded, gradually my temporary home, with its nest of empty crisp packets and cans was unveiled. I was helped out of there by shocked dock staff, and have been slowly recuperating since: it appears that a diet comprising only Monster Munch and Irn Bru has some deficiencies in certain areas. I believe this may explain why I am still so very pale, and the light still hurts my eyes. Although I wonder if that might have something to do with the little bat that we found I was sharing my container with - the dock workers found its body crushed under a dislodged pallet of Irn Bru cans. And for some reason, I do seem to be developing a strange, strong hankering for...blood?
*This may be an entirely fictional account of the last 6 weeks. Or it may be entirely true. The choice...is yours.
Image source

Greville Tombs said…
I choose "entirely true" - the time line fits right off, and there just too much detail in the account for it not to be. You were very lucky.