I'd never heard of the prolific forger "Antique" Smith before I saw the email notification about the talk on him from the Society of Antiquaries in Scotland. But I like archives, and history, and the fact there was a legal case that arose from it meant it sounded like an interesting outing. So last night I went along to the National Library of Scotland, where this talk was being hosted. 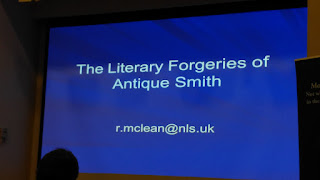 So, what did I learn? Mr Alexander Howland "Antique" Smith had quite a busy time of it between 1887 and 1893, churning out at least 500+ known (at a conservative estimate) forged manuscripts and letters attributed to a wide variety of well known people over all sorts of time periods. However, he seems to have had a particular liking for Robert Burns and Sir Walter Scott....or maybe they were just more saleable items!

He was trained as a law clerk, in the firm of Thomas Henry Ferrier WS, and it seems that old legal documents stored in the firm may have been the early source for paper for his initial fakes. Apparently, the skills he would have learned in this role would also have been just what he needed to become a good forger - patience when drafting and copying lengthy documents, and attention to detail when drafting. Although he needed to pay a bit more attention to detail than he did in the end!

He was a very prolific forger, and used the flyleafs of period books bought secondhand as the basic material for his documents. He used various techniques to age them, including dipping them in weak tea, and rubbing dirt into creases to give the appearance of age, especially in areas where they would have been expected to be folded and refolded over the years. However, he was somewhat lacking on real attention to detail, and his forgeries were riddled with problems.

In the case of his forgeries of Scott's letters, it was noted that his way of folding the letters he made differed from the way Scott would have folded them. Letters were regularly noted as being from specific locations, often some time after the real writer had moved away, e.g. Robert Burns apparently wrote a letter from a home he'd left a year before. One person wrote a letter, despite having been mortally wounded in a famous battle the day before. Cromwell wrote while in another city to the people who were be in charge of Glasgow, telling them to maintain order...but at that time, he was in Glasgow himself. Written materials which would not normally be signed, e.g. memos, had signatures attached, purely because it would make the letter more valuable. The paper he was writing many of his fakes on had a bluish tint, like the paper used for legal documents, rather than normal writing paper. He used modern (in the 1880s) pens and ink, there was no attempt to try and match the writing materials of the appropriate time periods. He would work around wormholes in old paper, giving the impression that the worms must have been considerate animals indeed. And his attempts at actually matching the handwriting, although probably informed by having seen some samples of the real writer's style, were not hugely successful. Although in the case of Robert Burns, his own handwriting did vary with time...and drink!

Quite a catalogue of ineptitude!

Despite all this, he still managed to sell a lot of forgeries to a lot of people. There were a variety of wrangles prior to him being discovered as the creator of the forgeries. They related to manuscript collectors who had been defrauded, concerns about the honesty of the alleged document experts who had somehow vouched for the authenticity of these shoddy copies, charges brought in the Sheriff Court against Smith of theft/fraud (he was found not guilty), a case raised in the Court of Session in 1891 against a seller of some of the fake documents (the pursuer eventually instructed his law agents to drop the action, so it didn't progress), and requests to have the disputed documents assessed by staff at the Faculty of Advocates to check their authenticity (an offer which the document expert refused to take up), he was identified as the originator of the flood of fake documents which had suddenly appeared on the collector's market.

He was brought in front of the Court of Session in June 1893, on 4 charges relating to pretending to various booksellers and pawnbrokers that false documents were genuine. There were 98 examples of his work gathered as evidence against him, and together with the existence of his forgery hut/summerhouse (with its contents of pens, inks and books on copying handwriting) and the testimony of the many witnesses who had bought from him or seen him with a large volume of old documents, unsurprisingly he was found guilty on all charges. The recommendation from the jury was for leniency, so instead of penal servitude, he was sentenced to a year in prison. After he served this, he mostly drops out of history.

The irony is that, despite not being very good forgeries, Antique Smith's fakes are now collectable items in their own right. To this day, they're still being uncovered in archive collections around the world, have appeared listed as genuine in auction listings (although identified and removed from sale before the actual auction), and many more may lurk in the collections of notable families who kept quiet at the time of the trial, not wanting to admit that they'd been duped. However, if they were discovered now, the forgeries would be left physically untouched, with careful cataloguing demonstrating their provenance as forgeries. Unlike the examples we were shown from historic collections, which were gleefully marked repeatedly by some long-gone document manager with purple stamps saying "SPURIOUS"!

Outside, there were examples of original letters by Burns and Scott, and Antique Smith's forgeries of these two author's hands...I decided against testing my fake spotting skills though!


Of course, what I want to do today is start looking in the Session Cases and see if it's a reported case....