What do you do when you decide to do what is verging on library-based insanity, and basically scrap your current library service, and relaunch everything - physical layout, LMS, and classification system? In my case, spend a year, planning, developing, preparing….and then a frantic few weeks hauling stock!


The background to this apparent madness is this: when I took on this role I inherited a library using a layout that didn’t seem to make sense, a classification system I wasn’t familiar with, and an LMS that had been in place for 20 years but didn’t seem suited to our needs. As I was new to the library, a major part of the time I had available while settling in during my initial few months was dedicated to exploring how well these things were working, both for users, and library staff. I had the benefit of my colleague also being new to the library, only a few months after me, so together we looked at these issues with fresh eyes.We came to the following conclusions:


So, what was my solution to these issues?

Well, those are the main points of my relaunch plan. The actual implementation takes a little bit more effort than that!

Since last week, my colleagues and I (the excellent Assistant Librarian and a fabulous intern) have been working on the actual physical relocation of stock. We’ve now got the ground floor rearranged to its final layout, have moved half the stock from the mezzanine floor to new (temporary and permanent) locations, and we’re now ready to do the big shift of the textbook stock. This is where the users are going to see the biggest change, as almost everything on this floor will be changing its location.

We’re now in the quiet period for my workplace, and luckily we have had the extra help of that fabulous intern - having three people work on this has been so helpful, and we’ve got about half of the stock-moving done in a week. Since I estimate that we’ve moved about 8,000 volumes in the last few weeks, and we probably have the same to move again before we’re done. It’s physically demanding and exhausting, but it’s satisfying to see things taking shape.

Despite me having tried to explain what we were doing in the library and why to a variety of people in advance of this move, it’s only now that people can actually see for themselves how things have changed that they’re beginning to see what I’ve been talking about. Already we’ve had positive feedback, which is very good to hear - it’s been a LOT of work to do this, and knowing that users are happy with what’s been done is a great vindication!

It’s not finished yet either - once we have the bulk of our textbooks on the LMS we’ll be officially launching the new system to users, and training them on the new uses of the system - they can see their own account to check what they have on loan, see who has the items they want out on loan, request books of photocopies be sent to them, and all sorts of exciting new things that just weren’t possible before. The relaunching of the service continues...

So, what would I advise if you were planning to do something similar in your service, that on first glance seems to be verging on masochism?

*To be honest, it’s probably actually far more items than that - we just keep finding more stock in random locations!

**How can something that took up 30 inches of shelf on one floor take up 40 inches on another floor?

*** Why were the loose parts from that volume from 1991 not sent for binding? Does this volume need a repair on the spine? Everything is so dusty, should we be cleaning these?

And now...time to get these empty bookshelves filled up! 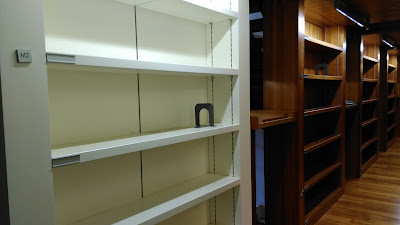 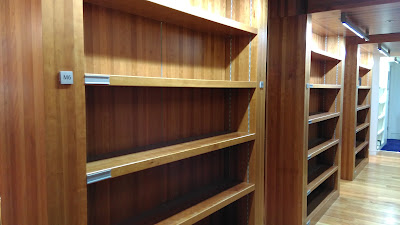