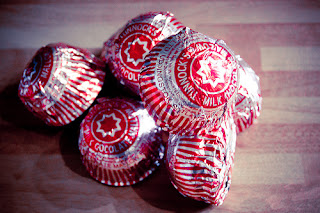 Yes, so we all know by now that Jaffa Cakes are definitely cakes. (Cakes go hard when exposed to the air, unlike a biscuit, which goes soft. It's because a cake is more moist than the air, so loses it's moisture to the air and hardens, while a biscuit does the reverse. That's the wonderful world of science, kids!)

And that Marks and Spencers won a VAT refund from HMRC, which had misclassified teacakes as a chocolate covered biscuit rather than a cake, and therefore added VAT to them from 1973 until 1994.

And what about Tunnocks, also purveyors of fine teacakes: have they applied for their refund? They've been making them since the 1890s...that could be some tax refund!

After looking into VAT on snacks a while back I became quite obsessed by this! Am sure M&S must have got the refund (and I like to think they used it to fund those £10 meal deals, which are basically philanthropic works) but I can't find it anywhere in their financial statements.

I also wanted to say that I heart your blog (because it is fun and because some of my favourite people are law librarians ; ) ). Sorry. End of sycophancy!
20 February 2011 at 00:05

DeanM said…
If only HMRC had paid more attention to the name of the product "tea cakes". Oh well at least we have a definition of each now. Though I do worry about those giant cookies you buy from the supermarkets in little bags. They're soft and go hard when off. Does this mean they are cakes?
23 February 2011 at 15:05

Dumpling said…
@Michael Ah Tunnocks, made in my homeland!

@charmianoldman22 Jam? Jam? This is not an appropriate teacake filling! ;)

@Tax Law Scotland Nice work on the digging - the meal deals are indeed a service to society, although they're sadly lacking in a nice stovies meal option :) I'm also concerned that you're actually managing to write a fun and humorous tax law blog...are you sure you're really a lawyer? ;)