October 10, 2016
Last month, for the first time ever, my library took part in Doors Open Day. My organisation has taken part in DOD for many years, but the library had never been involved before. From my first days in the library, I was aware of the need to raise its visibility, both internally, and externally. We've been working hard internally to raise awareness of the service, so that was being dealt with. To add to that, taking part in Doors Open Day seemed to be a good way to show the public more of what goes on in the organisation, and what resources are available to the service users.

My colleague and I worked hard to make sure that the library would be an interesting destination, and the public would know about it. Because the library is in a secure area, the only way to visit was to book onto one of the two tours running throughout the day, and choose at the end to come to the library. We made posters to leave at the booking desk, and another popular visitor area, to tell people how to get into the library. We put signs up in our windows, which many members of the public passed on their way into the building. We told other members of staff about the activities and items we had in the library, so they could tell the public. We're unsure whether it was the effect of this promotion work, or just general curiosity about the existence and work of the library, but visitor numbers exceeded our expectations - we suspected maybe only 5-10 visitors would continue on past the end of the tour to the library, but in the end at least 20 visitors per tour came to the library, meaning at least 200 people visited the library on the day.*

We restricted access to anything beyond the main ground floor corridor - we couldn't allow visitors to go where we couldn't see them, so we had to keep them in this space. To block access to the rest of the ground floor, we used roping, kickstools, and...Magnus.

So what did we have for visitors to do and see int he library? We had three desks to use for display in the ground floor space, and we used each for different purposes - one for an activity, one for display only, and one for browseable texts. We also used the library service desk to display additional items, and freebies for people to pick up. A window hosted a display usually managed by another department, but which we used this year, and which worked well with the materials we had to show.

Unfortunately my phone camera doesn't cope very well with the contrasts between the areas of dim and bright light in the library, so these photos make it look like there were some very bright lights on the books, when they weren't anything like as bright as that!

At the first desk, we were hosting the materials which another department usually displayed, on technology through the ages. These materials included old quills, ink pots, document bundles and handwritten ledgers, along with a typewriter, floppy discs and dictophones, and these were placed in the empty window space above the first desk. To complement this, I bought quills, a dip-nib pen and nibs, and calligraphy inks. These were put on the desk in front of the technology display, with a layer of blotting paper, laminated example sheets of calligraphy, and a pile of squares of paper, to allow visitors to try their hand at writing with quills and nibs. This proved to be hugely popular, with all ages of visitors - frequently, people were already trying out the quills even before I had welcomed them to the library and invited them to try them! Almost every person who visited the library left with some sort of inked item: the Chinese ladies' names were particularly impressive, as was the beautiful poem about souls left behind by one visitor.

We had a display of some of our older and more interesting texts from the special collection on the second desk. This included a 1699 text by George MacKenzie on "Laws and Customs of Scotland in Matters Criminal " which discusses the crime of witchcraft in some depth (accompanied by a modern English translation by me of the first few witchcraft pages), a text open at a 1665 case of son of a William Wallace trying to claim his inheritance, a text from the 1800s on the trial of Lord Melville for "high crimes and misdemeanors", a Latin text from the late 1600s, a copy of Regiam Majestatem from 1609, with additional annotations, a book on "the Douglas Cause", and a selection of other interesting books. After this picture was taken we also added a selection of handwritten deeds from 1700, with beautiful handwriting. Although the library has many modern texts, and electronic resources, we felt that they aren't as interesting to the public as "old stuff"!  The materials on this desk were the source of most questions from visitors, with people wanting to know about book ages, authors, history, contents,the legal system, the handwriting, and all sorts of other random things!

We had a third table, with dictionaries of crime for people to look up the changing penalties for certain crimes. There were also exampes of books about practitioners of the law, and how they view themselves (the Punch drawing about the absurdity of women barristers was well liked - apparently, they'd just have their silly little heads turned by fashion) and materials on notable trials, including one being re-enacted on site that day. These were for visitors to flick through themselves, 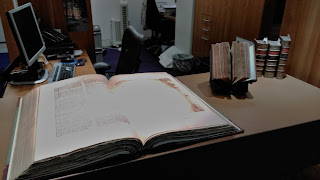 The library service desk was used to display a large volume of the record edition of the Acts of the Parliament of Scotland, with a Glendook duodecimo edition for comparison.

We had a tour group arriving approximately every 20 - 25 minutes, with the visitors able to stay up to 15 minutes in the library. As the library is in a secure area, someone was needed to escort visitors from the library and the building when they wished to leave. My colleague took this role on, and was busy constanly going back and forth as people requested to leave. I therefore was responsible for doing the talking - not a job I'm generally particularly keen on, and it was quite challenging - getting the attention of an unknown group, who were leaving at random times, and trying to explain the different desks and their contents to them, along with answering totally unpredicable questions. I think I got into the swing of it quite quickly, and I got quite a few laughs from the visitors - one even said I'd made a location and information that could be dry and boring into something interesting and fun, so I'd say I got away with it!

It was great to be able to speak to members of the public about what the library and the library staff do, and they had some interesting questions, which put my general and legal knowledge to the test! Some I knew, some I didn't know and have found out, and some I've yet to check.

Also, there were some unexpected things: someone was so keen on the quill and ink that I decided to give them a few of the spare feathers, to take away and showed them how to cut the shaft to be able to use it to write with. Another person was so fascinated by the translation of the witchcraft text that he asked if he could take it? We were happy to oblige, and printed ourselves another copy. Someone else wanted to understand and discuss the comparable points of Swiss and Scots law. An English-qualified retired legal practitioner wanted to know what the equivalent of Halsbury's Laws of England was, as she'd never known but assumed it existed (it's the Stair Memorial Encyclopaedia of the Laws of Scotland). Magnus also was occasionally "interfered" with by visitors, and I sometimes spotted people taking books off the shelves which had a rope in front of them to discourage that. As they weren't special or unusual, I wasn't concerned about this, but it was surprising to me that people would touch things that were obviously meant to be off-limits. I suppose I'm just not used to how odd the public can be!
Overall, it was a hectic, exhausting, but very fun day - I'll definitely be taking part again next year - will you be visiting?

* This is just an estimate - we were way too busy herding people to be able to count them, especially when two tours colluded and we had 40+ visitors in the library at once!